Oh how time flies when your having fun!

September started off with a BANG!  While I was still in New Zealand my second year of Civil Engineering at the University of Vermont got underway.  This semester I am taking Statics (the study of structural bodies in equilibrium...i.e. Bridges, Buildings etc), Electricity and Magnetism (an introduction to circuits and wiring basically and how electricity works!), Geomatics ( An introduction to Engineer Surveying and GIS...i.e. the people you see on the side of highways and job sites with the yellow tripod and a meterstick) and lastly an online English course.  So far these courses have been extremely interesting!  They are not the easiest courses out there but I wouldnt change what I am studying for anything!  I am really enjoying Statics especially.  I cant stop looking at cranes, building and bridges without thinking about the applied loading  and moments created about their joints!

After New Zealand I went back to Burlington for two weeks then it was off again back to Switzerland. We had a great two week long camp in Saas-Fee.  Despite getting altitude sickness for the first time in my life and some bad weather days it was an excellent camp!  After Saas-Fee we headed home for the final three weak break before the season began. 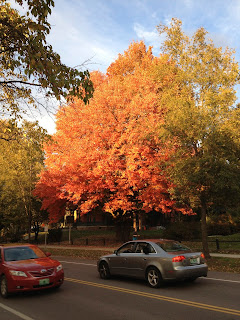 Burlington is a beautiful place in the fall.  I had a great time at home trying to find the brightest leaves.  I was also thoroughly amused by Meui, my room mates massive ginger cat.  While at home I had my classes and labs as well as all of my workouts to do.  I felt very busy but I had a great time!  I left Vermont on Sunday the 28th of october very comfortable that I was going to have an easy trip over to Europe.  This was not to be the case.  As you may know this was the day before Hurricane Sandy hit the east coast.  My flight from Burlington left a half hour late (this seems fairly standard now from Burlington on United)  this made me a little nervous but still left me with 30 minutes to switch gates to my next flight in Newark Airport.  Unfortunately when we arrived we were told we would have to wait on the tarmac because another plane was currently sitting in our gate.  We ended up waiting 30 minutes.  I missed my flight to Munich and after immediately heading to Customer Services realized I was in big trouble.  Staring back at me from every TV screen in the airport was the massive photos of Hurricane Sandy and warnings to basically not be anywhere near New York City or New Jersey (Newark airport is about twenty minutes from downtown New York...and in New Jersey).  I arrived at the desk after waiting in line for 20 minutes to the news that they could only book me on stand by the the night of the 31st.  That was the earliest flight available from the east coast to Europe.  The airport was closing by this time and I started to weigh my options.  I looked into hotels near the airport (though the prospect of sitting in a hotel during a hurricane wasnt very appealing) and very luckily for me my boyfriend told me to look at buses.  There were none running to most of the big urban centers ( they are all along the coast) but I found one going to Albany and booked it.  It was the very last bus leaving New York City.  The rest were cancelled indefinitely.  I made my way on public transit from the airport to Newark Penn. Station.  Must say it is very confusing that there are a New York and a Newark Penn.  Station twenty minutes apart.  But I arrived there ok and was confronted with a closed Greyhound station!  Luckily for me after about twenty minutes of tense waiting my bus did show up.  I feel very lucky that I was able to get out.  At that point the city was warm and very still.  No cars or people on the streets and lit up skies from the low cloud.  It was eerie and silent.  New York without people is a bizarre place.  I arrived in Albany at 2:50 am.  My boyfriend drove my car down from Burlington to pick me up.  We arrived back in Burlington at 5: 40 am...just as it started getting light.  After a few hours nap I headed to class for the day.  What else can you do?  I immediately got in touch with the National teams travel agents and arranged for a new flight out of Montreal the next day.  Then we settled day and waited for the hurricane to hit.  Each gust of wind seemed like the start of it and each cloud the first of many to come.  Luckily, Burlington and most of Vermont escaped unscathed but we watched on TV as the every place I was 12 hours before was drowned in water and cut with wind.  Once again,  I feel very lucky to have been able to get out of Newark.

The next day my good friend Ben drove me to Montreal and dropped me off.  My route to Europe this time took me through Toronto.  A much safer route!  In the Toronto lounge I had a most amazing act of kindness!  I happened to also lose my credit card while I was in the Newark airport.  While in the Toronto lounge I happened upon a sale online on a pair of boots I have been looking at since the summer.  Jokingly (well kind of jokingly) I called my brother to beg him to buy them for me since I had no credit card to pay for them.  A lady sitting near me heard this conversation.  She bought my boots for me!  I am still amazed at this.  She didnt even want me to pay her back!  Never has someone offered to purchase an item for me out of the blue!  I will definitely be sending her a very kind and thankful gift when I get back as well as a cheque for the boots!  I will also never forget her kindness!  I am super excited to get my boots!


So after this exciting trip I landed safe and sound in Europe and proceeded via train to Solden.  We did two days of soft snow training and relocated to Reiteralm where we had another two days of great training.  I am now in Helsinki about to board my flight up to Levi!  I am very excited to race this Saturday in the first World Cup slalom of the year! 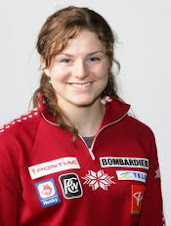 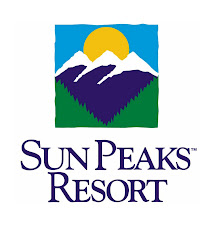